Felt great during the run despite the heat.

Alternative could have been to skip the chomps and aim at 27-30 carbs + coconut water throughout run.

Because of the whole phone debacle it was an hour before I got home.

Had (flavored) greek yogurt and vitamuffin before rushing to catch a train [40+ carbs].

Did same insulin formula as in the past – 10u.

Had the perfect summer lunch put together by a friend :

We went inside for fruit salad + chips and salsa (and I was really mindful of how many chips).

Was reminded to alway make sure you have enough insulin before leaving the house … I had 3 units. So not cool when we’re baking!

We went to a diner for dinner  – I went for Omelet / skipped the carbs.

Then I gambled and did insulin once I got back to the city at midnight without doing a blood test first (which is just stupid) and went low (duh).

Aside from the late night, I felt like it was a really balanced day (I finally had that cupcake once I was near insulin) I was annoyed to have Glucose Tablets & Orange Juice crash the party.

And that is a day in the life of a (/this) diabetic.

I had planned to do my 4 miles after yoga Thursday night last week.

Just as I dropped all my stuff and started up the treadmill I got the feeling that I should do a blood test.

Just not for doing a run when my insulin was still going through it’s 2 hour peak.

But since I already started the treadmill I decided I was going to knock out (a slow) one mile.

And then I packed it up and went home.

Packing up did not include glucose tablets or a wallet … if it had I would have fueled or run into the CVS near by  – I was determined to get my run. So much so that I debated running home, fueling up with some chomps, waiting out the 2 hour peak and going back for the remaining 3 miles. Then I sat down when I got to the apartment and that whole idea vanished – I was in for the night.

So my first run cut short from blood-sugars …. I’m sure there will be plenty more runs thrown off.

The time a child procedure turned me into a 26 yro child:

I got tubes put in my ears today for the 5th time. It’s like chicken pox & getting your tonsils out – more likely to happen during childhood. Which it did… twice. And two more times in college.

But never in NYC….loud noisy NYC.

The first time I got it done in college I was a Freshman and was in for a bit of sensory shock. It was Easter weekend and I remember being frightened about returning to the dorm where my loving but very loud new BFFs were. By senior year I played up the adjustment memory and it ended up being no big deal.

This time I had it done right in the doctor’s office, as opposed to the hospital. It was less stressful than a dentist visit. Left ear done, no sweat. Only then I was hit with that wave of a low feeling where it hits hard & washes over you. As the doctor began on the right ear I interrupted him to grab glucose tablets. Then while he was making a note I grabbed my monitor – 98. That’s not low. Took the tablets anyways. The doctor was awesome, made sure I was ok, got me water & a cold compress. Even though Diabetes isn’t his field (and you’d be surprised – just because they’re a doctor doesn’t mean they really know about one of the biggest current epidemics) he was aware. I haven’t actually been taken care of during a low in quiet sometime & as I told him, I was glad it happened while I was sitting in a chair vs. walking around the city.

So what was up? Who knows, could have been my body’s reaction to the procedure as much as bloodsugars – stuff that “regular” people might encounter but I recognize as low symptoms.

Where does the child part come in?

After the appointment I had a meeting, which aside from wanting earmuffs for the subway, went well. I think it was the first time I wanted a cool big pair of headphones. Instead I just wore my iPhone ones to muffle some noise (that’s right NYC I wasn’t really listening to anything).

All was fine & dandy. Until I get home. And crashed. Suddenly I’m a kid….who desperately needs a nap, I’m exhausted .By late afternoon I found myself with my hands over my ears scowling at the refrigerator for humming and the airplane outside for flying. And saying “nnnnnNo!” To no one or anything in particular.

Much like this kid (he gets favorite points for switching gears at the mention of ice cream).

I was supposed to go to a networking event but finally I realized that no one wants a cranky two-year old at a grown up function….especially when the two-year old is actually 26.

This is a very bad pattern.

After talking to the doctor : should have retested at 500 since it was off. 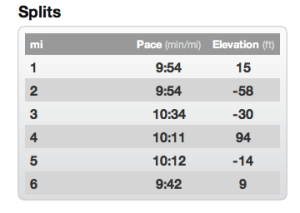 New sneakers. Awesome run. This should have foreshadowed shin splints.

Fastest speed for that distance yet.

Went super low (37) while running errands which delayed run, overcorrected and went up to 400. To prevent skipping run (and try out new sneakers!) I did 7 units. I had just under a serving of oatbran with peanut butter before heading out.

Major adjustment period for blood-sugars. After a week of running low (and eating a lot of oatmeal!) I overcorrected and woke up too high for a run. Which I then also overcorrected ….and went low.

Wiping out my Sunday.

The Adventures of Now